I kid you not. According to recently analyzed satellite data, in August 2014, a “…1,000km-wide swirling mass of plasma” hovered “several hundred kilometers above the North Pole” for about 8 hours, raining electrons. Professor Mike Lockwood of the University of Reading, says the phenomenon “must be created by unusually large and rapid transfer of solar wind energy and charged particles into the Earth’s upper atmosphere.”

This may not be an unusual occurrance.

The fact the hurricane occurred during a period of low geomagnetic activity suggests they could be more relatively common within our solar system and beyond.

Articles: Space hurricane observed for the first time from the University of Reading and The first known space hurricane pours electron ‘rain’ in Nature

Do you happen to have a carpenter in your family tree? How about a blacksmith? A bricklayer? Or any of 127 different crafts practiced in the American South (coopers NOT included, more’s the pity). This is your lucky day! I have just stumbled over this bit of magic! The MESDA Craftsman Database is an awesome resource.

As a I often do, I was running Google Book searches on random ancestors, just to see. Upon entering “Benedictus Horsington” into the box, the first thing to pop up was from The Journal of Early Southern Decorative Arts. Only a very confusing snippet was viewable, so I searched for the journal. Which I found, in full, through the Internet Archive. It took a bit to find the right issue. But, at last, Volume 25, No. 1, p. 172:

But what does it mean? To find out, I went to the Museum of Early Southern Decorative Arts website. The Research tab led me to the database.

When I typed “Horsington, Benedictus” into the appropriate field, I got the three records referred to in the journal. I clicked the apprenticeship record:

I’ve long suspected that Benedictus was the son of Thomas Horsington and wife, Katherine, who I’ve seen in Princess Anne County records. However, I’ve had no proof. Now, I do. I got more details when I looked up his Master.

One wonders what kind of role model Master Burns was to his young apprentice!

Filled with elation, and curiosity, I next searched for “Lathinghouse.” Well, our dear Andrew, living in Gloucester County (this was news to me!), indentured himself to William Taylor of James City County 13 Sep 1708. This indenture was supposed to last until “ye last day of March in ye yeare…Seven hundred and ten.” However, Taylor sold him to the Honorable Robert Carter, Esq. 3 Nov 1708. With little option, and, I would imagine, tons of frustration, Andrew agreed to serve Mr. Carter for an unspecified period after the original indenture expired. This occurred 9 Mar 1709. All of this took place in Lancaster County. Why articles of indenture of a man in Gloucester County to another from James City County happened in Lancaster County, I have no clue.

Another impulse led me to enter “Searles” into the box. Francis was my 7th great-grandfather. Bound to Covington 21 Feb 1738 until he turned 21, he was to learn the ship carpenter’s trade. Covington, himself, had learned his trade from James Curtis, to whom he was bound 15 Jul 1729. At that time, he was “almost” fifteen. The youngest Searles brother was taught a different trade.

On Petition of Covington Searles It is ordered that the Churchwardens of St. Anns Parish do bind Thomas Searles an orphan of Edward Searles deced an apprentice to Richard Coleman to learn the trade of a Joiner

DNA analysis has shown that dire wolves aren’t nearly as close to gray wolves and other canid species as previously thought. In fact, they appear to have been the sole survivors of an ancient lineage and should have their own genus, Aenocyon. The lineage of the dire wolf and that of the gray wolf split more than 5 million years ago. And, even stranger, dire wolves never interbred with either gray wolves or coyotes.

A fascinating study from Stockholm University hints at a possible outbreak of Yersinia Pestis, aka the Plague, in the area west of Lake Baikal about 4400 years ago. It also demonstrates a genetic relationship between peoples inhabiting the Baikal area about 6000 years ago and Paleo-Inuit populations in Greenland approximately 4000 years BP.

Some teeth discovered in Meipu cave in China, and dated between 780,0000 and 990,000 years ago, are NOT Homo erectus, but something older. They seem to have closer similarities with Homo ergaster and the Dmanisi hominins than with H. erectus.

Yay! Who will they cast to play Kate Sheffield, the future Viscountess Bridgerton and able wielder of the Mallet of Death? I’ve wondered if one of the Sheffields would inherit the Featherington estates. Or, perhaps, one of the Penwood family?

Can’t wait to see. Also, I love that Queen Charlotte has such a prominent role in the show, but, this is a Regency series. Where’s the Regent? Why hasn’t Prinny made an appearance?

They praised every daisy and then called every blackberry a stain. They bled the color from God’s face, gave it a dangle between its legs, and called it holy. Then, when they were done breaking things, they pointed at the sky and called the color of the universe itself a sin.

Very excited about this. I know there have been some fairly lengthy inscriptions found recently written with Linear Elamite.

The first episode is EPIC! Just the look on Ivar’s face! The rest of the season felt anticlimactic after that. Until the Crazy Man. I’m excited for Valhalla.

I watched the whole series, only stopping long enough to prepare dinner. It is awesome! Can’t wait for the second season!

In my post about Thomas Laughinghouse, Sr., I mention an early Andrew Laughinghouse. He purchased 100 acres “lying back of the north side of Pamplico River” from John Bean 2 December 1738 (Beaufort County Deed Book 2, p. 292). Andrew Laughinghouse, brick layer, sold this land to John McKeel 29 Aug 1741 (Beaufort County Deed Book 2, p. 407). Thomas witnessed the latter transaction. Since that post, I’ve learned there was one more Andrew.

By 1 Mar 1717/8, he was in Chowan Precinct, North Carolina.  On this date, he was contracted by Joanna, widow of Thomas Peterson, to build a brick chimney among other sundry “works & labours.”  He charged her £10 sterling.  In Jul 1719, he sued her and her new husband, Paul Palmer, for nonpayment.  This case was, eventually, dismissed in Mar 1723 (North Carolina Higher Court Minutes, 1709-1723).  Andrew had to pay costs.

Thomas Laughinghouse, but not Andrew, is listed on the Beaufort County Tax List for 1755, and only with one white poll, meaning he was the only male in the household of or over the age of 16.  Perhaps he died between 1741 and 1755.

Yes, you read that right. There was, indeed, a junior. According to the Journal of North Carolina Genealogy, Volume 18-19 by William Perry Johnson, p. 2811, administration on the estate Andrew Lathinghouse, Jr. was granted James Calef in 1740.

When discussing the senior Thomas, I make a point of clarifying this myth. His wife was named Susannah, NOT Patience. But, it turns out, Patience did marry a Lathinghouse.

Henry Crofton of the Said precinct [Beaufort] gent…on or about the Sixteen day of April 1734 in St. thomas Parish and precinct aforesaid did as a Justice of the peace Join Andrew Lathinghouse and Patience Smith together in the holy state of Matrimony….

But which Andrew?  Your guess is as good as mine.  Crofton broke the law when he performed the ceremony.  The parish of St. Thomas had a minister in residence, John Garzia.  It was illegal for a lay person to officiate if that was the case.  Crofton owed Garzia £2.5 and another £2.5 to the parish.  He also married other couples.  Garzia sued Crofton and a summons issued for Andrew and Patience.  They failed to appear and a warrant went out for them 30 Jun 1736 (see here).

I think he was the natural, legitimate child of Thomas and Susannah.  I cannot prove this, however.  It is entirely possible he was the son of Andrew, Jr. and Patience.  Thomas and Susannah may have adopted him after his father’s death in 1740.  But I don’t think so.  Not only was Thomas the only taxable Laughinghouse in 1755, but also in 1762 (Pitt County Tax List, 1762).  Thus, no other male in the family was born in or before 1746.

Header photo by Suzy Hazelwood and background photo by ShonEjai, both from Pexels 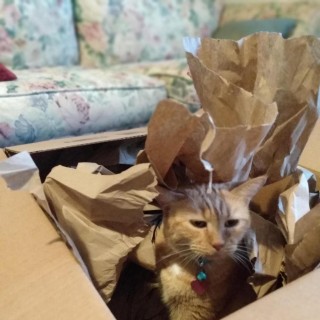 Well, I'm an avid and eclectic reader, genealogy nut and proud cat lady (the picture is of my Zoe). Other obsessions include gardening, history and Duke basketball. I also enjoy long walks that often end at the library.

The Scrapdex is just a little something to make my freebies a bit easier to find. You will find all of my scrap offers divided into categories. The links will take you to the relevant blog post, where you can check out the preview and decide if you want to download it or not. Before downloading any of my scrapbook freebies, please take the time to read my Terms. Thank you and have fun!